The geodetic station HOTEL is finished and working. In the morning we repaired the winch where a winch chain was broken. Thanks to Eduard Scheck from BLM and local workers!

Seismological Station at KIT-1 is working and online.

Colleagues from the seismological institute try to reposition the seismometer in Well KIT-2 to improve recording on all seismometer components. We logged with the televiewer in the Shumov Well on the left bank.

Parallel we had been logging in Shtolna1.

The colleagues from photogrammetry successfully made tests with the ground-based SAR (which we call Mäusekino).

First oriented four-arm caliper and Televiewer logging in well BH-KIT1. The winch had to be mounted on the drill strings. Expert Eduard Scheck was the winch driver and had the overview on all activities (e.g. checking whether Birgit is pushing the right buttons in the recording software). Because of the fracture zone the tools could not go down to the final depth of 229 m. The borehole was open to 146 m.

Today the teams of the geophysical institute, the institute of photogrammetry and the geodetical institute as well as logging specialist Eduard Scheck from BLM arrived at Hotel Enguri.

Borehole KIT-1 is at 196 m depth. Yesterday we had a cementation experiment. The drillers of Geogia wanted to know whether our cement mixture with 12% water would really work. They take their job very serious. We could convince them that the cement would work for pumping it into the borehole with the Glötzl-Tool.

Our drillers had to fix a problem with the drill core. Instead of being in the core catcher it got stuck directly behind the drill bit. They had to get out all drill string, fix the problem and then build in the drill string in again.

Because the 3C-seismometer has been deployed at depth, it is necessary to conduct a small orientation campaign using hammer “shots” at surface. Thank you Lasha for the nice impulsive arrivals!

Full test of the acquisition system including data transmission is done before implementation on site.

The local workers have finished building the NIKA station infrastructure, cement is dry. The seismological equipment can be installed now. Thank you to the hard working builders.

The 3C-seismometer is now standing 19.2 m below ground, at the bottom of the shallow well. The seismometer hanging cable has to be anchored at surface.

Finally, all components of the seismological stations are connected inside the water-proof box. Everything is looking fine. Seismic background noise is very low here!

Our colleagues from Eco-Risk did caliper recording in DAMTOP#1 while we went on with core analysis. Anyone interested in our core analysis?  In the afternoon went to the site where Khudoni dam should have been built.

The drill string was out from BH KIT-1 and Video-Logging was possible. Afterwards all drill string had to be brought back into the drillhole.

Videologging of boreholes DAMTOP#1 and DAMTOP#2 to test our new high-tech equipment (RedLineTool). It went well and thus we decided to use it in the tunnel drilled in 1987 and used for hydraulic fracturing measuements by Prof. Rummel (Bochum University).

We checked the location for the seismological station BUFF, where after hard drilling (fluid loss) the Sinergia drillers (see photo) have reached hard rock at 7m as predicted by Thomas Röckel. The tall person next to Birgit is Misha Kereselidze from Sinergia company, who helps us a lot to get our work done. Thanks to Misha.

Drill Rig is at 44 m. We have installed our field lab and this picture shows Birgit washing cores (housewife duties) in our field lab. In the afternoon Thomas was still working in the lab, but Birgit went to potential location of station DOG.

At least we could pass the gate to the place where we wanted to have our field lab. We started to build it. In the afternoon a speedy but very expensive Corona test, sponsored by Engurhesi Company. After 15 minutes all of us knew that we are negative. In the late afternoon we tried to investigate the location for the seismological station DOG, however Schlagbaum (Georgian word!) was closed, then we had the opportunity to drive along the Khoko landslide area and made a visit to a giant gypsum quarry (photo with Misha and Thomas in close contact because of negative Corona result).

We tried to pick up cash from a bank in Zugdidi. This took 2 hours!!! During that time the drill rig was set up (Photo). In the afternoon the shock: 2 positive Corona people in the village.

The smaller drill rig for the first few meters of the BH KIT-1 well has started drilling. In the evening the first drill cores could be stored in the core boxes for further analysis.

Drilling of second borehole at Station BUFF is going on. Due to large thunderstorms it had to be stopped for 2 days. But it is continuing now.

We are still waiting for custom clearance of the truck. The storage place at Enguri is provided by Engurhesi Company and waiting for the equipment. Our good friend George Melikadze is still pushing in Tbilisi.

The Team Röckel/Müller has defined the final position for the borehole in which the Glötzl tool will be installed.

On Sunday the Team Röckel/Müller had the opportunity to drive with M. Kereselidze and Georgian partners into the access tunnel to the borehole where Fritz Rummel in 1978 in the framework of a DFG project made Hydraulic Fracturing Measurements (see video). The car had to stop when the tunnel got narrower. As soon as rainboots are here, we can have a closer look. It is very good that Professor Gia Kalabegishvili from Georgian Technical University could accompany us so far – despite his obligations in Tbilisi.

Thomas Röckel and Birgit Müller arrived in Tbilisi early Monday morning and will move to Enguri Dam with the help of the Georgian Colleagues and Engurhesi Company.

The DAMAST Colleagues have packed many boxed with scientific tools and material. All the paper work had to be prepared and in this case Thomas Niederhuber and Detlev Rettenmaier had a number of sleepless nights. 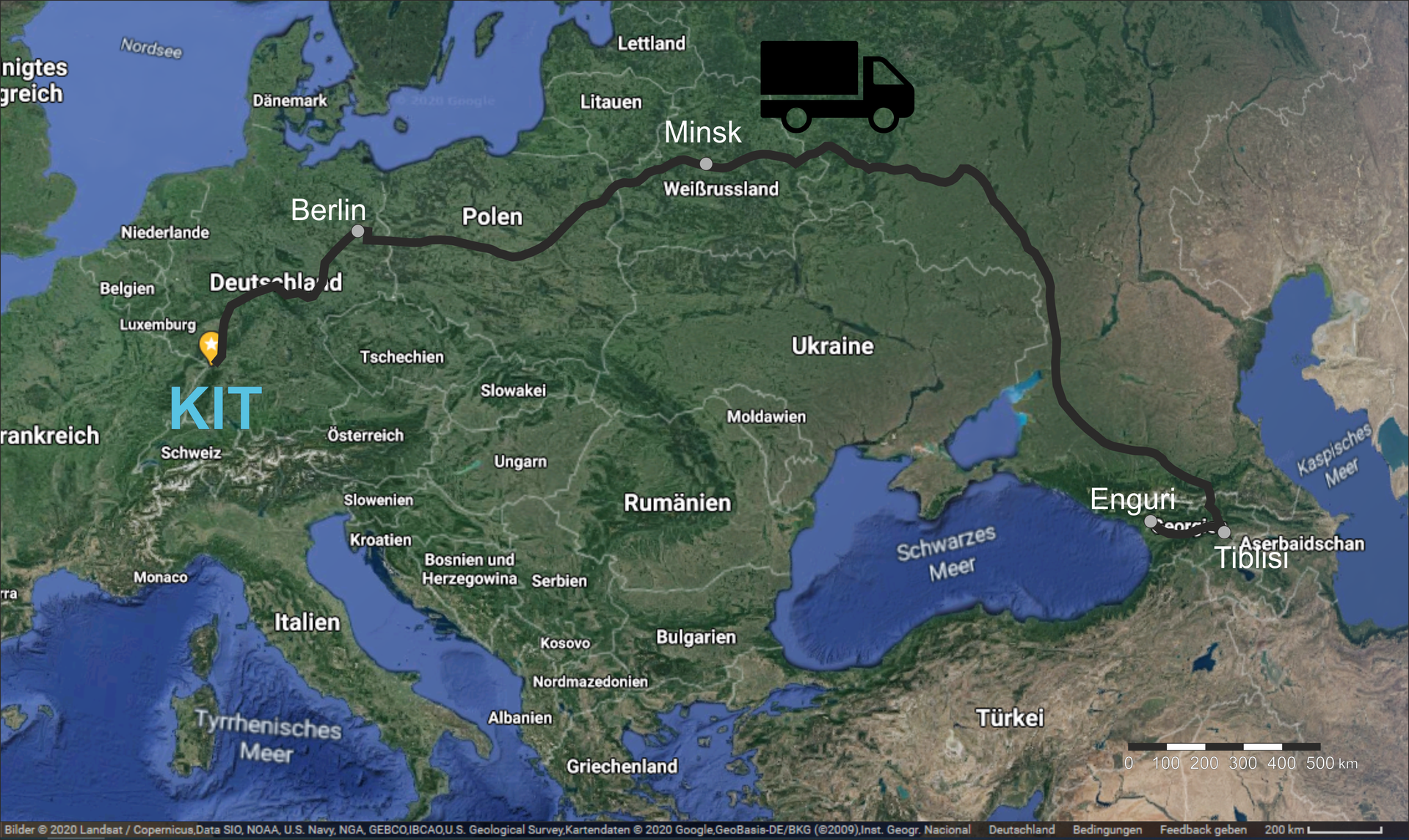 The shipping was performed by Martin international shipping company and the drivers meanwhile have crossed Belarus, where the political situation is currently somewhat critical.

The truck is now in Russia close to the border to Georgia and we expect it to arrive early September in Tbilisi from where it is shipped within Georgia to Enguri Dam.