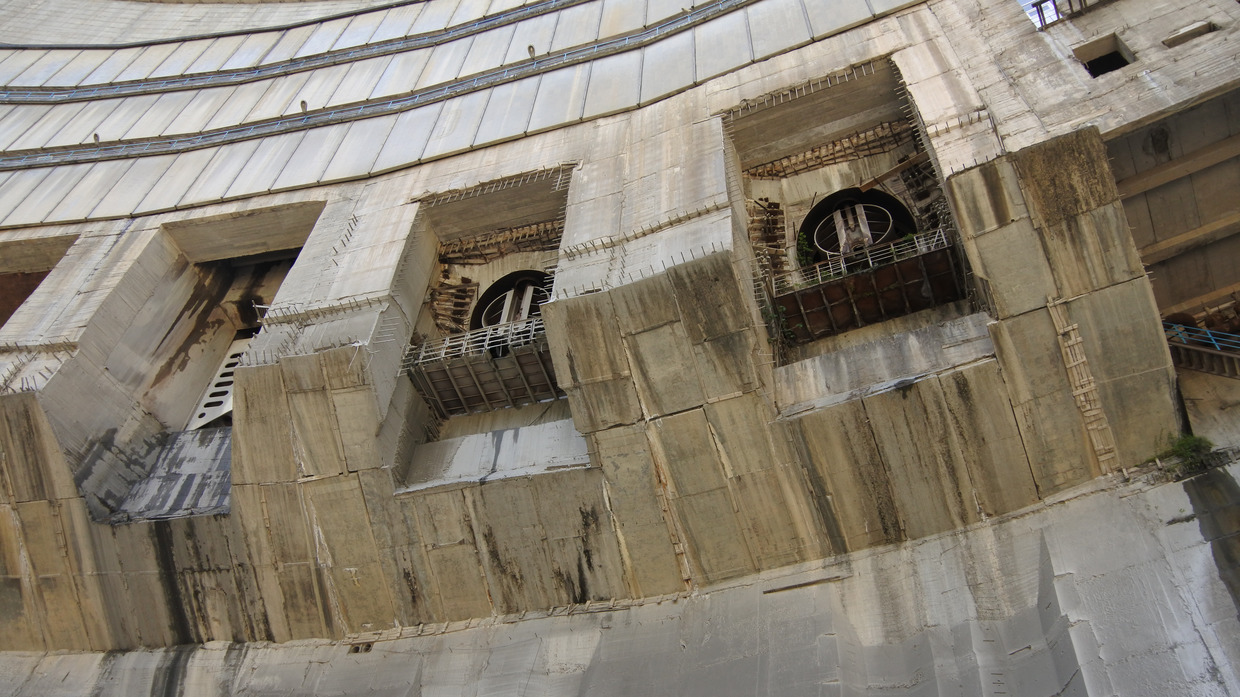 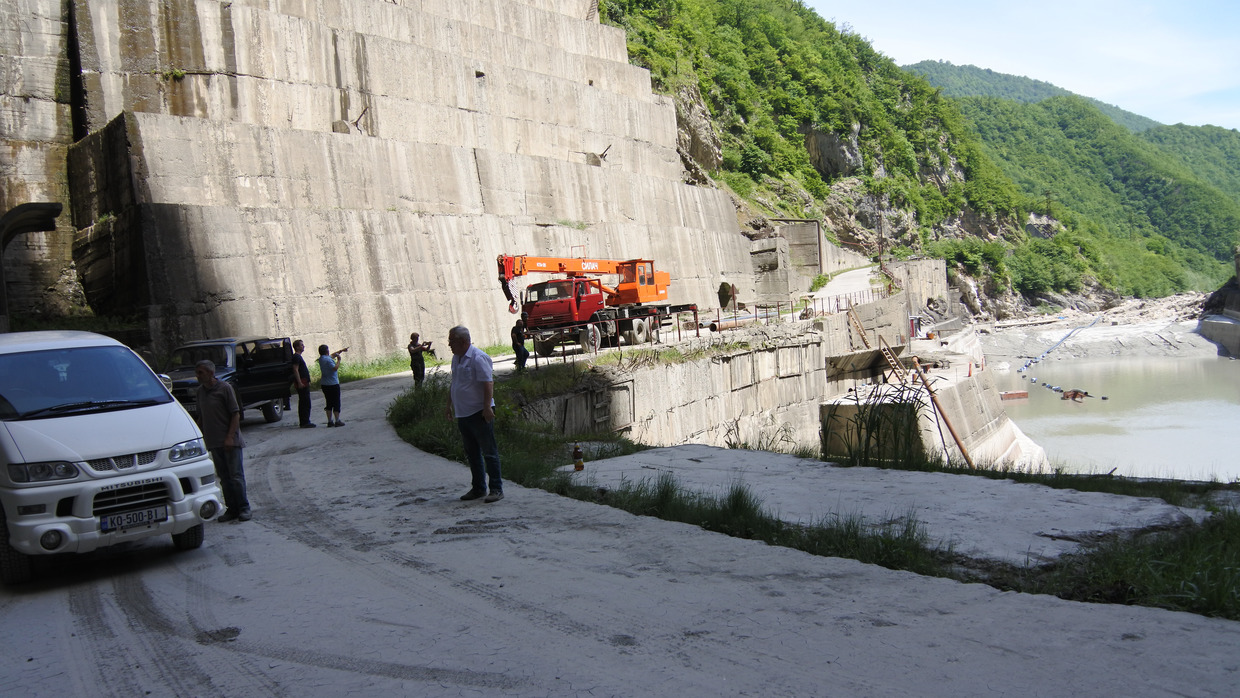 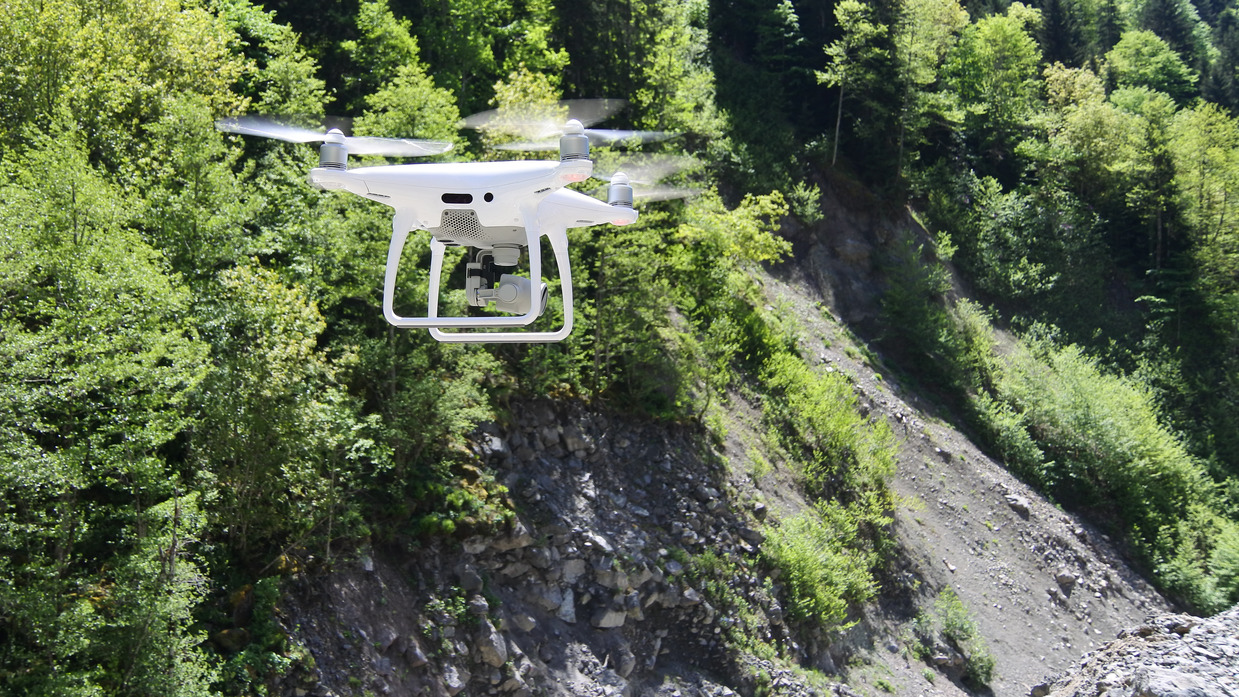 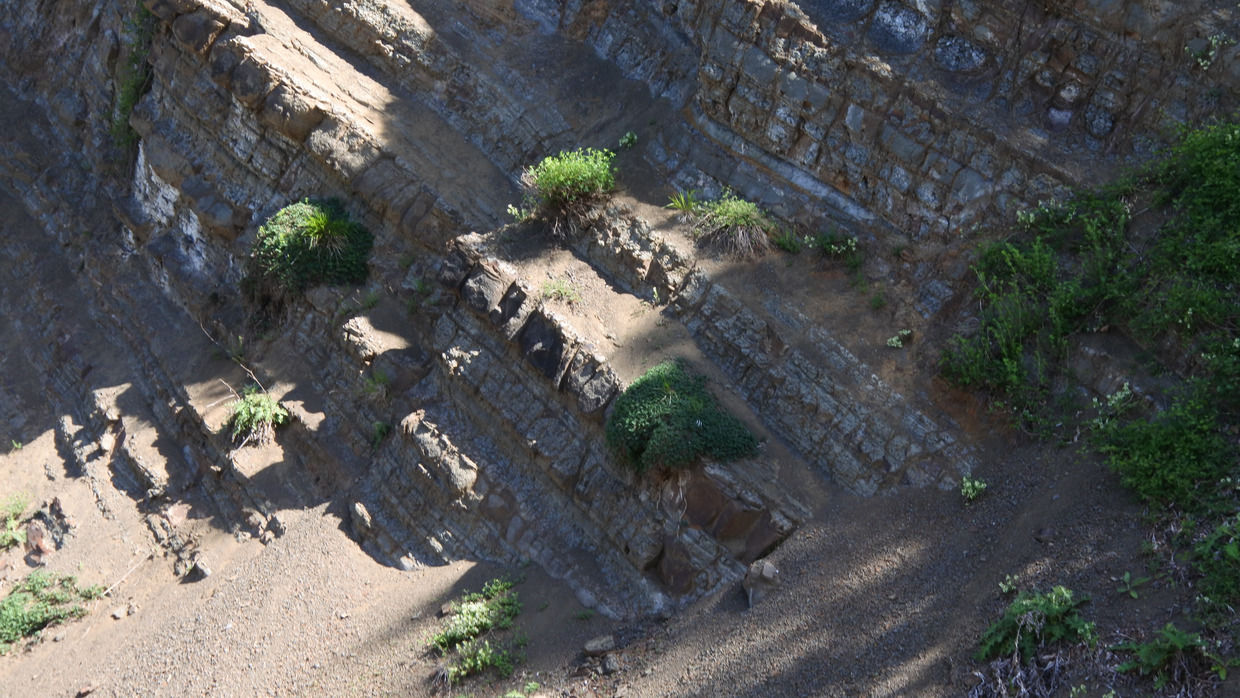 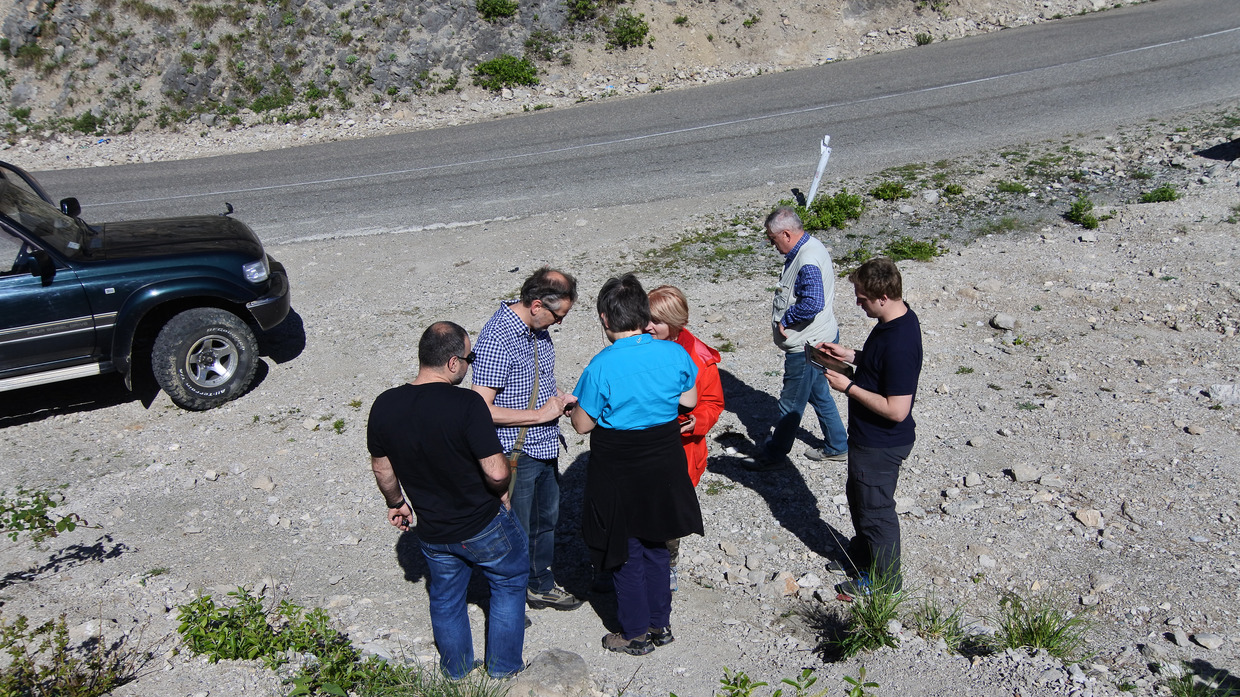 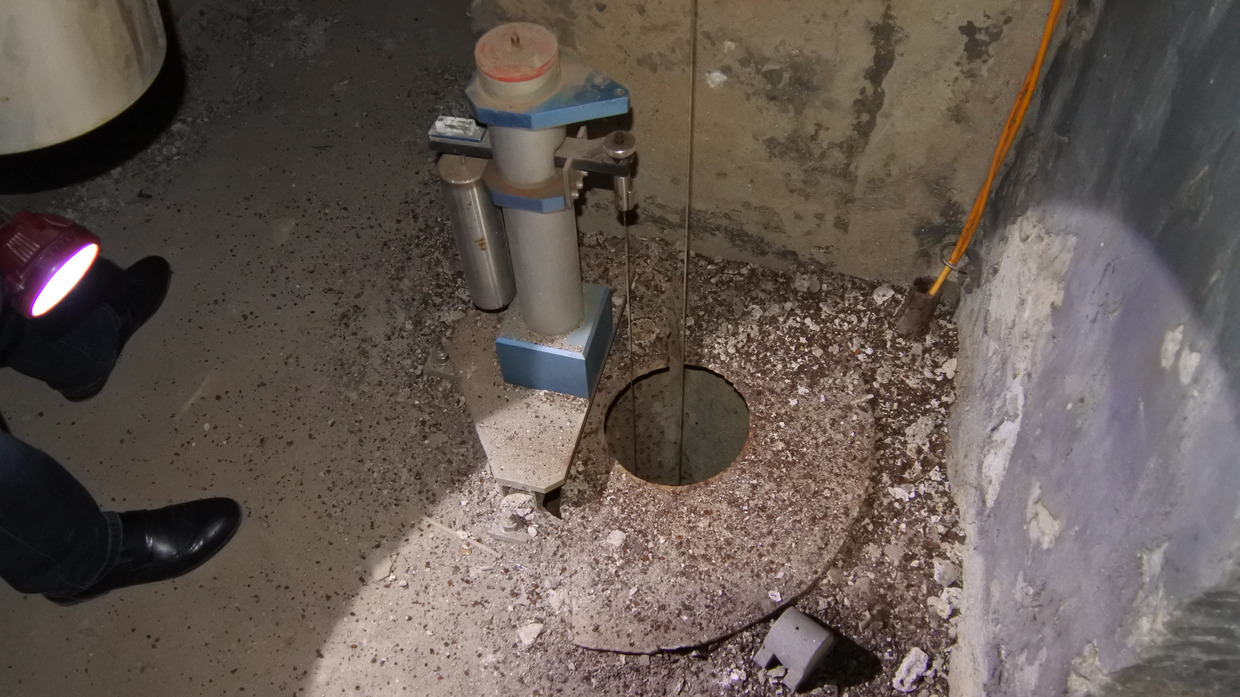 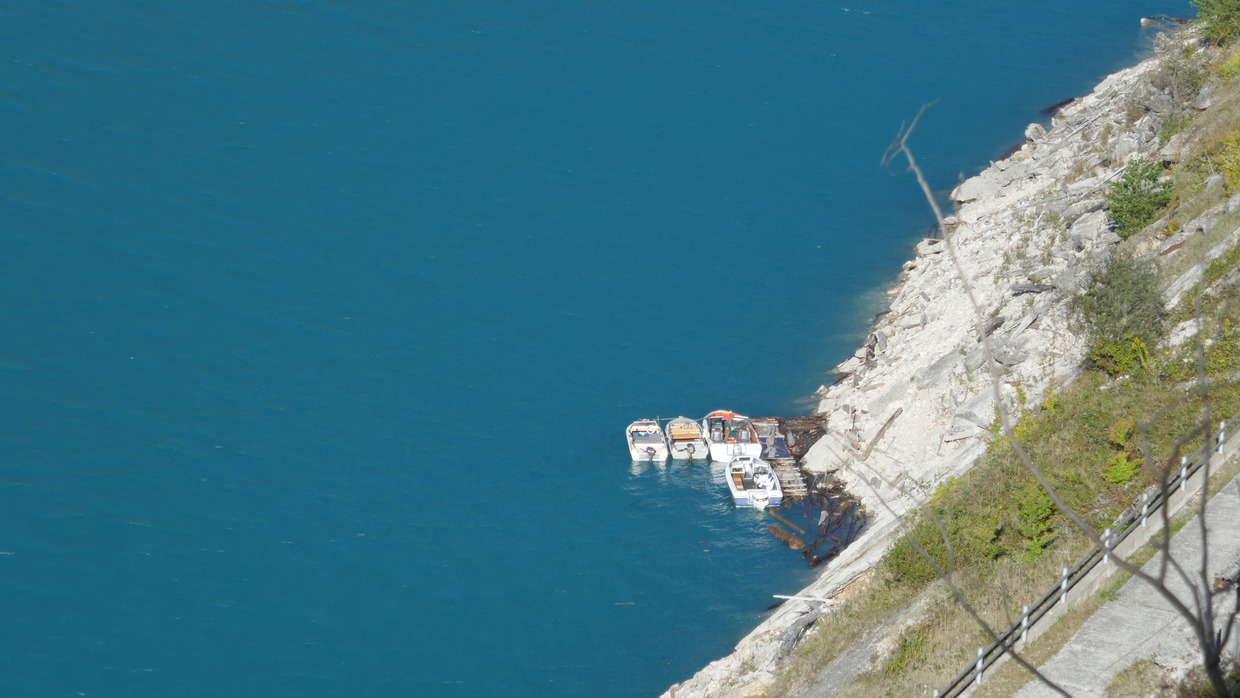 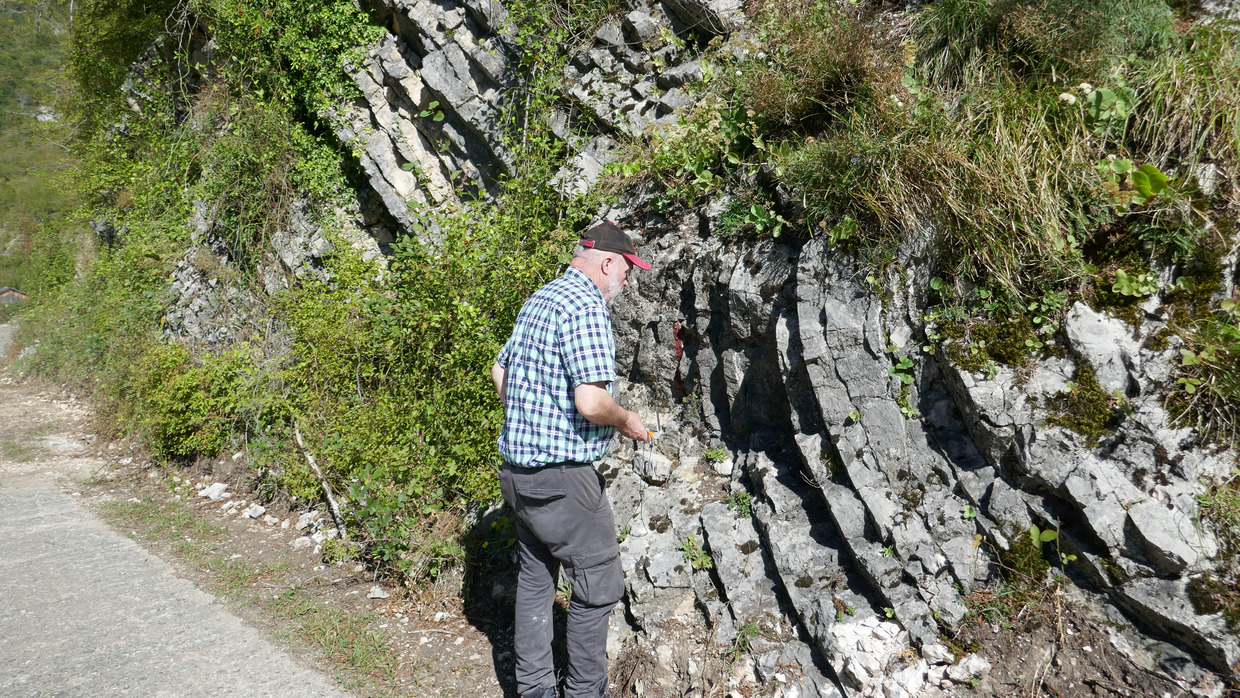 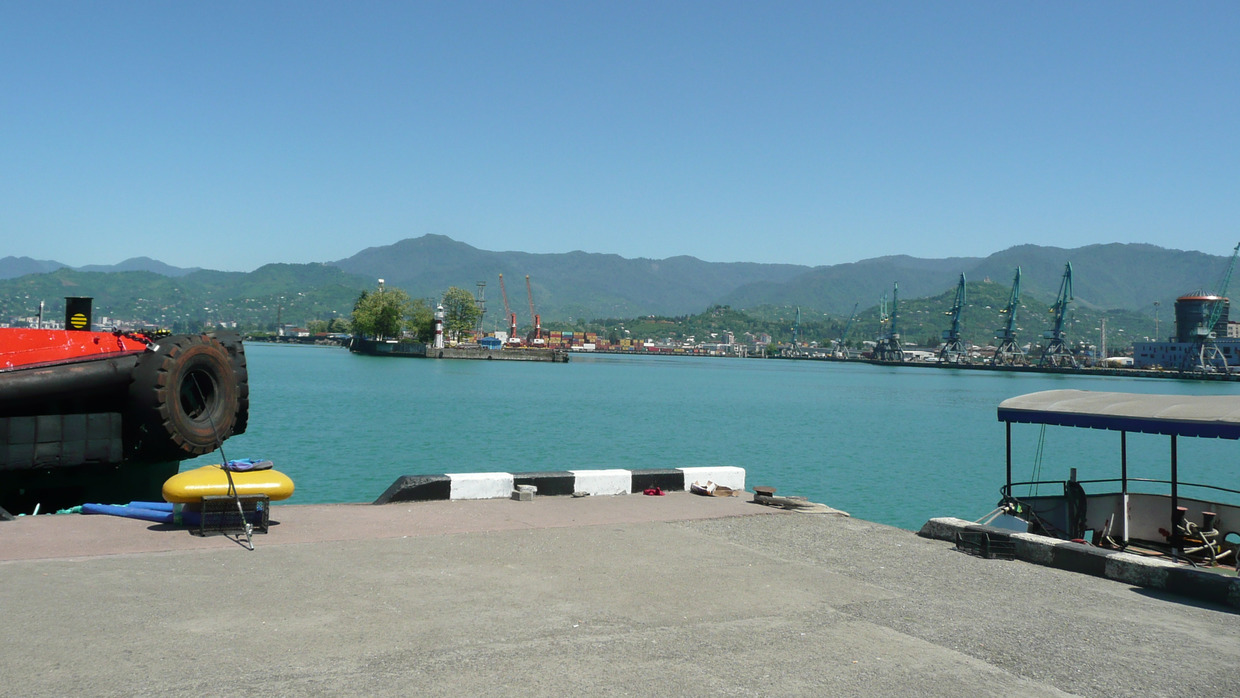 Stephan Hilgert and Klajdi Sotiri, both from IWG, first equipped the boat with the measuring equipment before the actual measurements could begin on Enguri Lake. Loading the boat was also a special challenge, as only a temporary jetty was available and the waves were quite impressive. The IWG team was able to implement almost the entire measurement programme by adapting the transect planning and slightly increasing the boat's speed. Three echo sounders were used. The multibeam echo sounder recorded the bathymetry of the Enguri Lake, the other two being used to identify the lake sediments. The preliminary results show sediment thicknesses of approximately 110 m of deposited material in the dam area. With the help of the low-frequency echo sounder, individual layers in the sediment up to a depth of approx. 60 m could be detected.

Fig. 1: To install the equipment on a small boat, a special holding device was built. Only then could the colleagues set sail. Even though the blue water is more like a holiday trip, it was a tough measurement program.

Our seismologists Emmanuel Gaucher and Nazim Karamzadeh were able to visit the seismometer sites together with Nino Tsereteli and other Georgian colleagues. Special attention was paid to the locations that could not be reached during the measurement run in May. This concerned in particular a location in the north of the Ingirishi fault in the high mountains, which could be reached now. The natural seismic noise of the earth at the future seismometer locations could be measured.

Fig. 2: For field measurements, you are not sitting on a comfortable armchair, but often bent over in front of the measuring instruments.

For the employees of the two deformation measurement subprojects, the focus was on further exploration and marking of measurement sites. Andreas Schenk and Matthieu Rebmeister from IPF identified three suitable locations for the terrestrial SAR experiment (GBSAR). Malte Westerhaus and Jakob Weisgerber from GIK anchored massive bolts and screw connections at a total of nine measuring points for the centred installation of GNSS antennas in the ground. Another measuring point for the GNSS campaigns was explored, but the ownership structure still has to be clarified. At six potential locations for permanent GNSS stations, continuous measurements were carried out for 24 hours each. They should provide information about the signal quality before major construction measures are carried out for the construction of foundations and piers. The support of the Georgian colleague David Svanadze is to be emphasized, without whose engagement the work could not have been carried out as planned.

Downstream the Enguri High Dam the main working area of Thomas Röckel, Frank Schilling and Birgit Müller, who, with the Georgian support of doctoral student Irene and an employee of the dam operator Engurhesi, were given access to the colliery-like corridors, some of which are equipped with strainmeters. This team carried out measurements of the structures at more than 60 terrain points.

In some places along the Enguri river security measures made by concrete can be seen, and the geological structures can no longer be measured. After evaluation of the structural geological data, the starting point for drillings shall be determined. One borehole is planned to be drilled through the fault zone. Instruments such as seismometer, pore pressure recording etc. can then be installed in the borehole in order to be able to monitor the changes in pore pressure and stress due to changes in the water level.

Franz Nestmann, Stephan Hinz, Roman Zorn and Andreas used the field trip to explore the catchment areas of the Enguri River and the Nenskra River. The focus was on the hydraulic-morphodynamic response of the waters. Above the dam area of the dam both rivers show typical features of a mountain stream, e.g. strong turbidity and wide grading curve of the bed and bank material. This is associated with a high bedload load and dynamics. Further construction measures on the Nenskra River, which have already begun, will change the sediment balance in the Enguri River sustainably in the future (-> Nenskra HPP).

Furthermore, the dam was visited and the foot of the dam was walked on. The problem of sedimentation in the reservoir leads to problems in closure of the stop log devices (Fig. 8).

Several leaks and circumferences of the dam and the surrounding mountains can be seen at the foot of the Enguri dam (Fig. 9).

Fig. 9: Leaks and outflows at the foot of the dam.

This fact indicates a high sensitivity to changing boundary conditions (sedimentation conditions, precipitation events, slope slides, seismic events, etc.) as well as the necessity of extended monitoring, runoff balances at the leakages in the tunnels, in the mountains, etc. and measurement of primary physicochemical parameters (Ph, Eh, conductivity and temperature).

In addition, the inclination measurement technology installed at the dam wall could be traced. Luckily, the operating company is helpful to provide details on the installation, current measurement data and the status of the monitoring.