A combination of geodetic and remote sensing methods is used to record the response of the dam to load changes and compare it with vertical and horizontal displacement patterns in its surroundings. We expect to observe vertical ground deformation of cm-magnitude in response to the annually varying water level, and we aim to estimate fault shearing and regional strain built-up in the tectonically active region. The integrated observation system for regional deformation detection is divided into three components:

Component 1: Permanent GNSS stations for the acquisition of transient deformation signals with high temporal resolution.
GNSS stands for Global Navigation Satellite Systems like the US-American system GPS and the Russian system GLONASS which are currently used in the project.

The permanent GNSS network is fully operational since October 2021. It consists of six measuring stations; all of them are built on massive pillars. The latter are embedded in a concrete foundation that is coupled to the subsoil with a depth of up to 1.50 m so that it is frost-proof. The mountainous landscape with all its steep slopes leads to increased shading problems for GNSS measurements. Certain compromises therefore had to be made when choosing the location, also for logistical reasons. Nevertheless, the choice of locations was carried out in the best possible way.

The measuring stations log the raw data of all visible GPS and GLONASS satellites every 30 seconds, correspondingly on one or more frequencies. After 24 hours, the recorded raw data package is sent to our institute’s server and is ready for further processing.

A network of ten fixed survey points was established in October 2019 along the eastern shore of the lake and in the southern foreland. The aim is to geodetically record regional shortening tendencies and shear movements over the area of the reservoir and to merge them with the results of radar interferometry.

The measurement campaigns last seven days and are carried out twice a year, in April and September. The water level extremes in the Enguri reservoir are reached in the mentioned months; the water level is minimum in spring and maximum in autumn when the water column is around 100 m higher. It is expected that the effects of the large water level variation will also be reflected in the results of the campaign measurements.

In the last decade, the methods of multitemporal SAR interferometry (PSI, SBAS) have established themselves as a recognized method for the spatially dense detection of deformation phenomena on the earth's surface. However, the results are strongly dependent on the temporal stability of the backscattering conditions at the surface, which is not guaranteed in overgrown and forested areas. Of special interest for SAR interferometry are, besides the dam and its foreland, the rocky shores of the reservoir. Hence, methods for the use of partially time-stable backscatterers and distributed scatterers must be further developed.

Three different SAR frequencies (L-, C-, X-band) are used. While the X-band data will be used primarily for the precise observation of the dam structure, its abutments in the host rocks as well as exposed slopes along the reservoir, a significant contribution to the determination of the regional deformation field is expected from the evaluation of the L-band data. For the free of charge available C-band data the suitability for monitoring ground movements in the predominantly forested and mountainous terrain will be assessed and recommendations for similar monitoring projects will be developed.

First preliminary evaluations of the C-band using Persistent Scatterer Interferometry (PSI) approaches show periodic movements of the dam crest in the low centimeter range, which correlate with the extreme water level variation in the Enguri Reservoir.

Several passive corner reflectors were installed in the study area. These three-dimensional retroreflectors have the task of reflecting the incoming radar signals from satellites and thus describing a stable reference point. The reflectors were built on solid concrete foundations with a depth of almost 1.5 m. With the installation of the last reflector in October 2021, the network has a total of six retroreflectors. The latter are regularly measured with GNSS, so that these points are absolutely known in terms of coordinates and serve as common points for regional and local PSI measurements to integrate all differential observations into a single geodetic datum. The corner reflectors were aligned with the Sentinel-1 orbits (C-band), some on the descending orbit, and some on the ascending orbit. It is expected that the reflectors can also be used in the X and L bands, although they are not exactly aligned with respect to the orbits of those SAR missions. 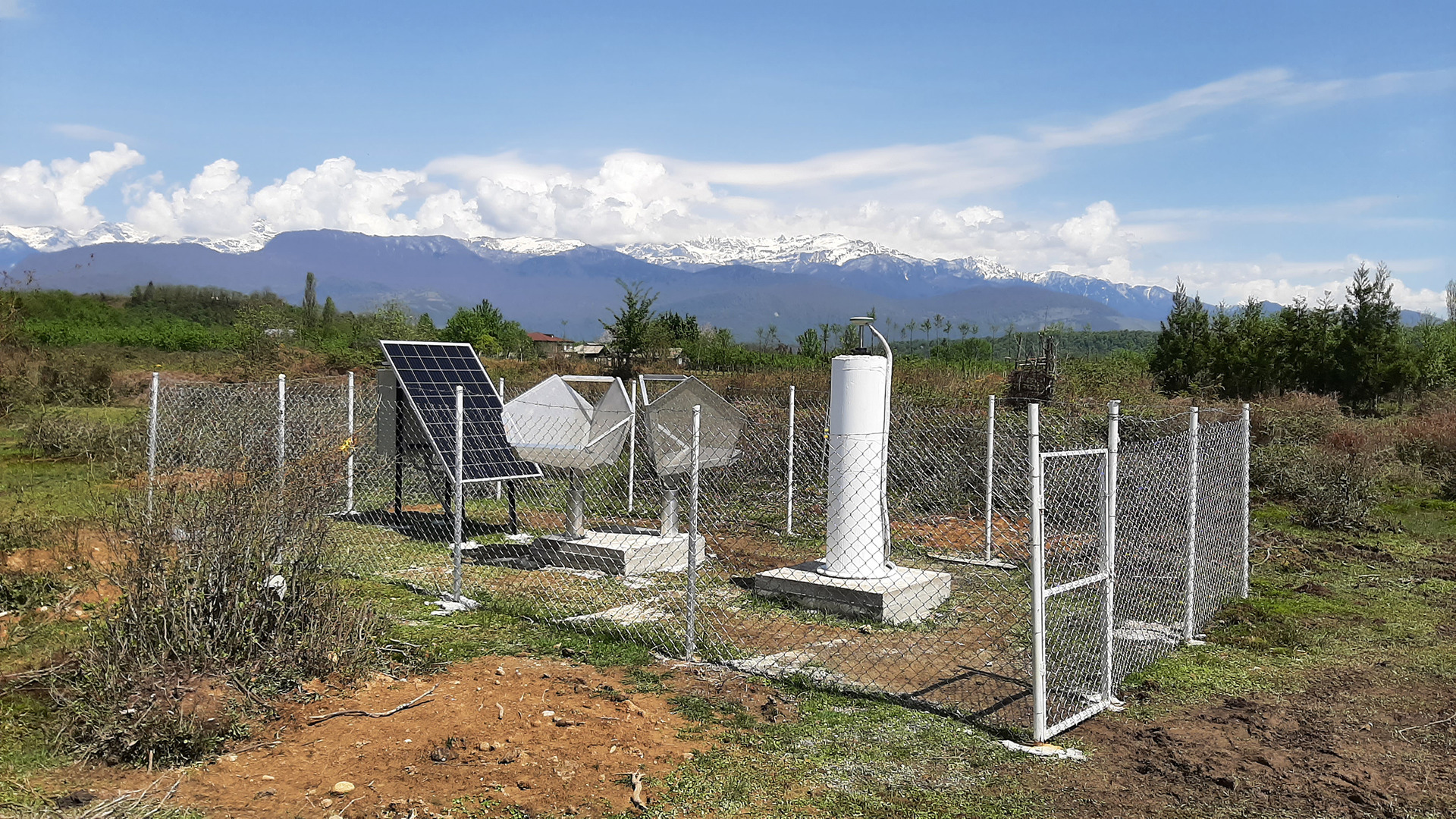 Complete geodetic measuring station protected by a fence; the station consists of a GNSS pillar with antenna, corner reflectors and a frame carrying the electrical cabinet as well as a solar panel. 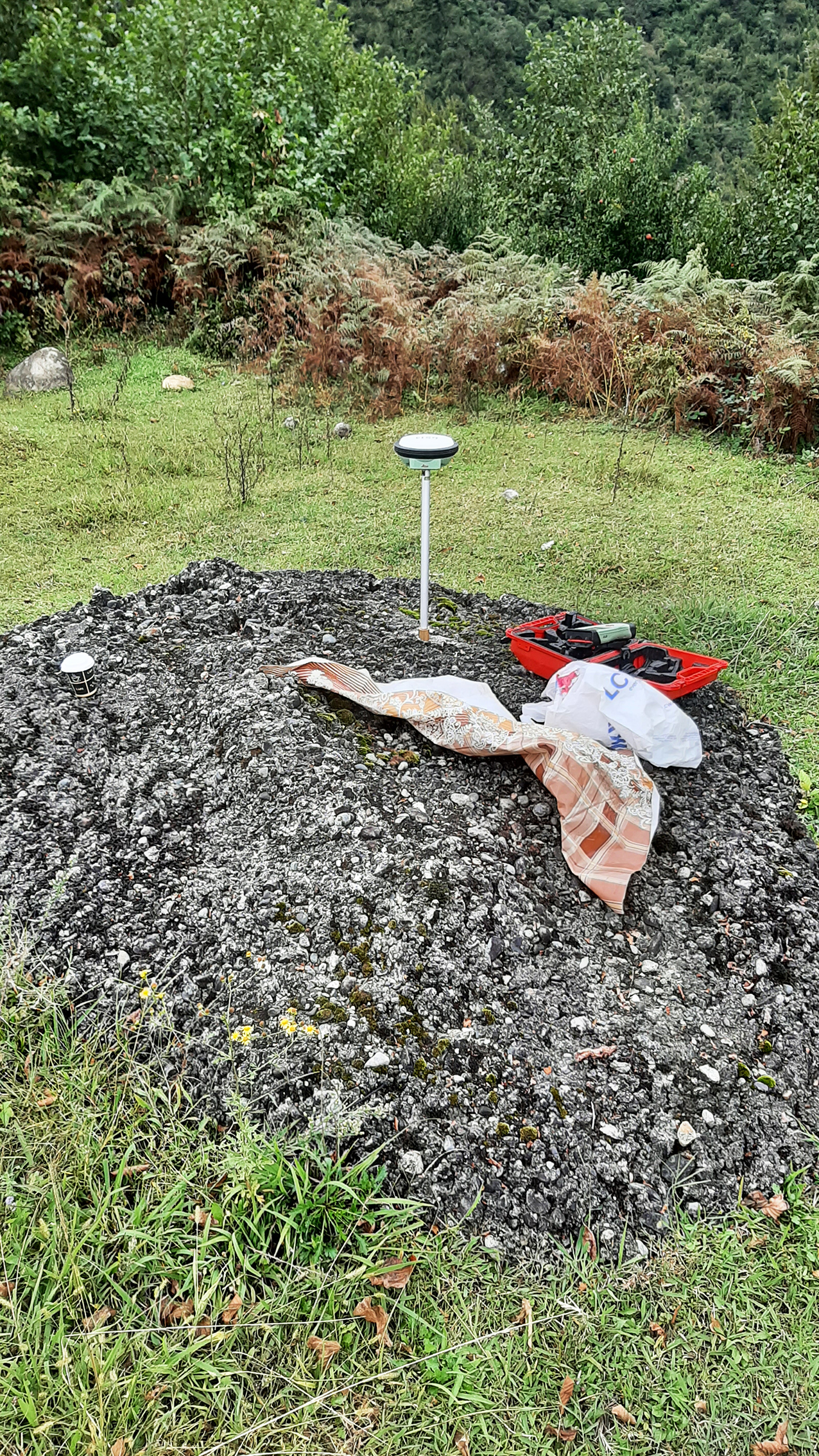 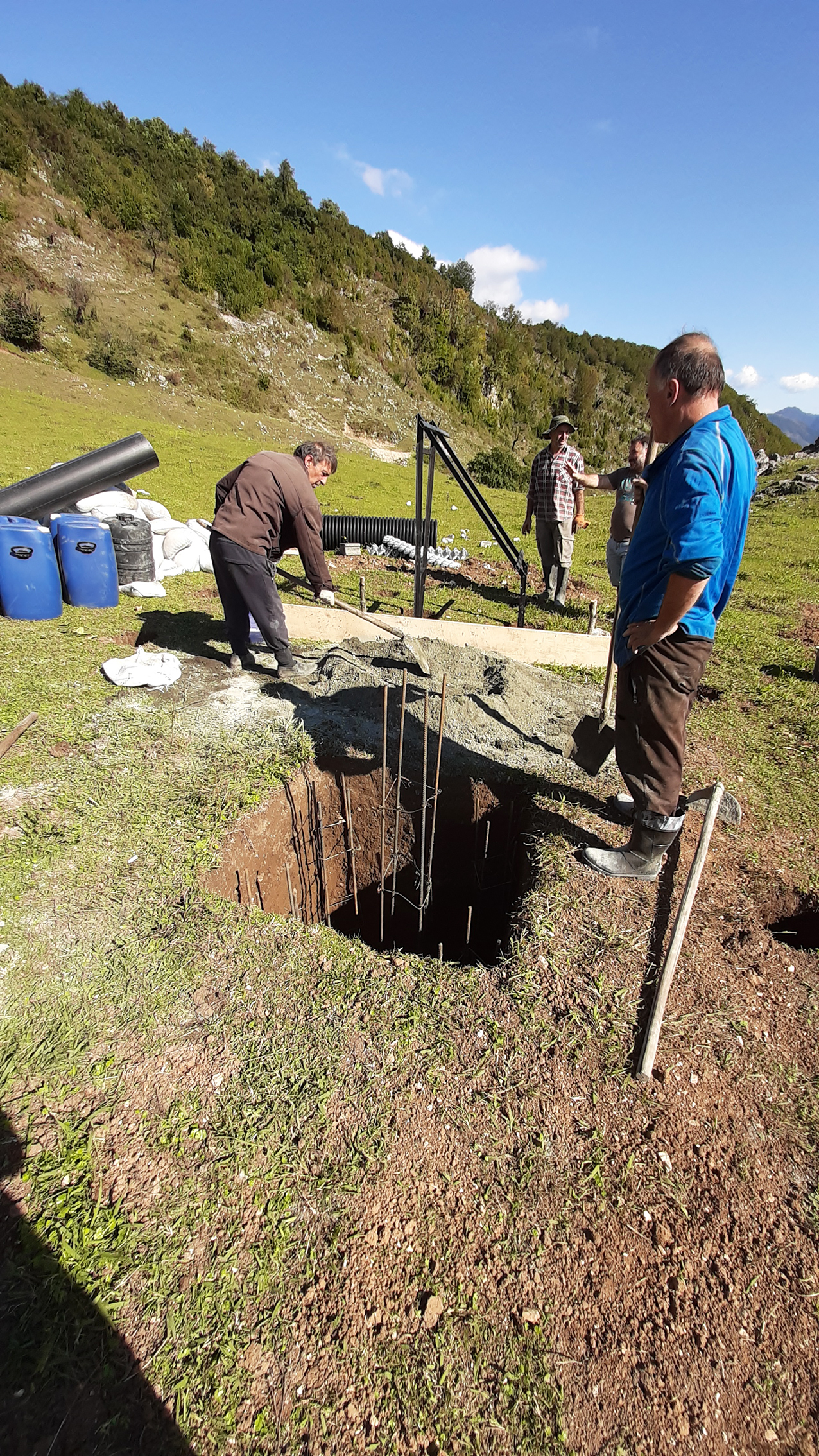 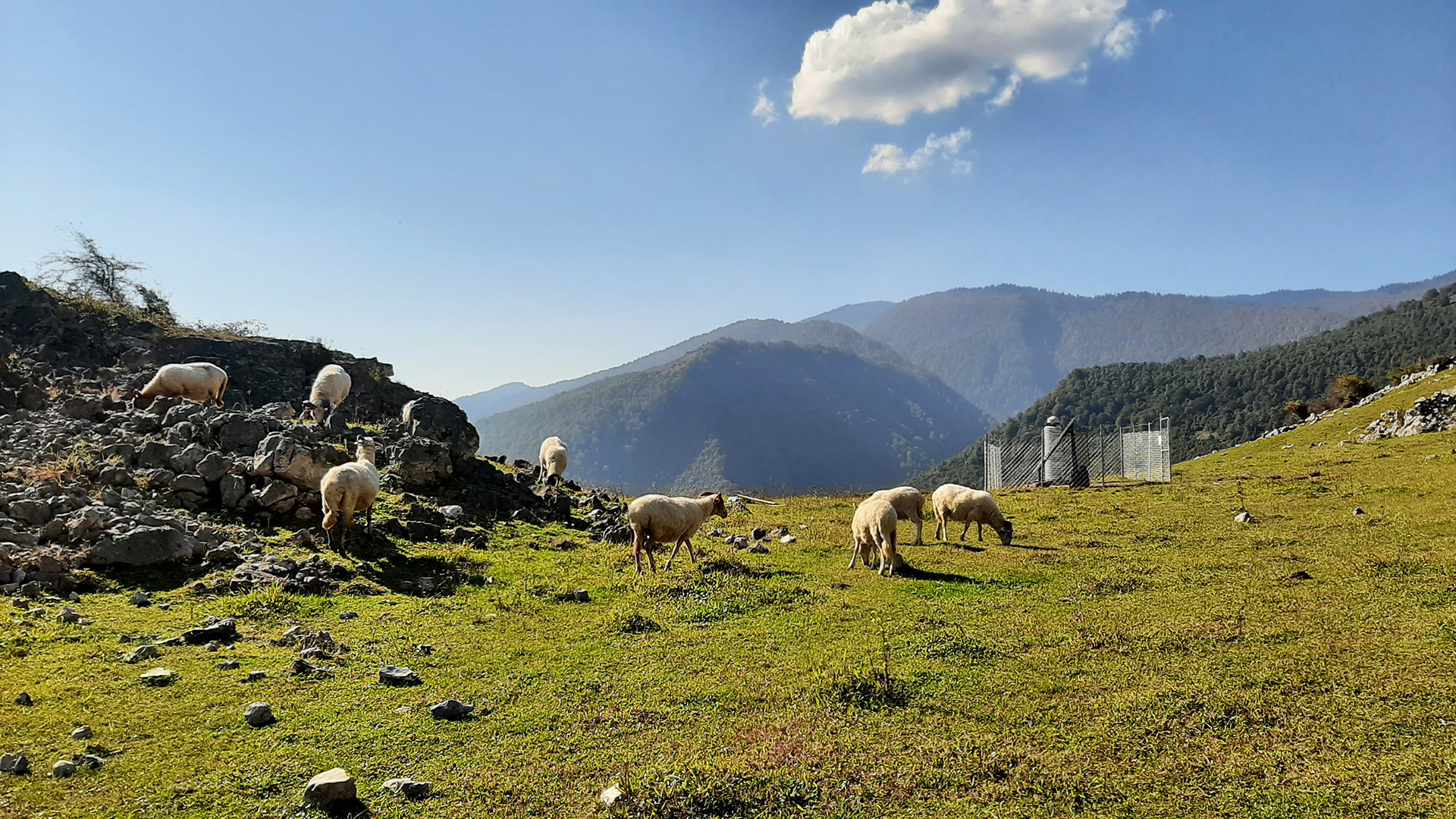 Geodetic station on a sheep and cow grazing land.